The name non-volatile memory (NVM) may refer to different ranges of things under different contexts.

In the context of storage systems research, when people say NVM, they often mean the third definition. Designing storage policies and building file systems for novel NVM hardware is currently a hot topic. The storage “hierarchy” has now become an entangled pyramid where different types of devices have complex & overlapping performance characteristics. To be strict, it is not a hierarchy any more. 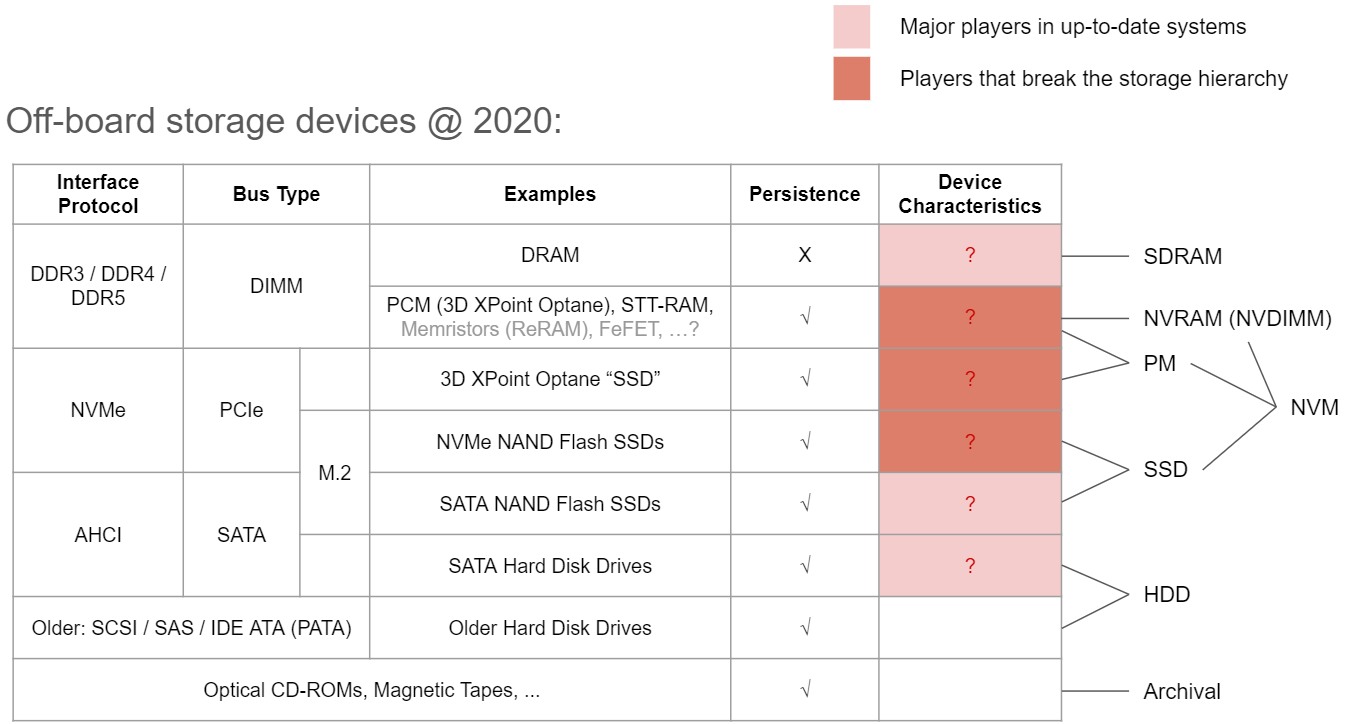 A traditional 2D NAND SDD consists of a bunch of NAND flash packages together with an on-device controller and an on-device DRAM cache.

A NAND flash package is a set of planar NAND blocks, each having the following architecture: 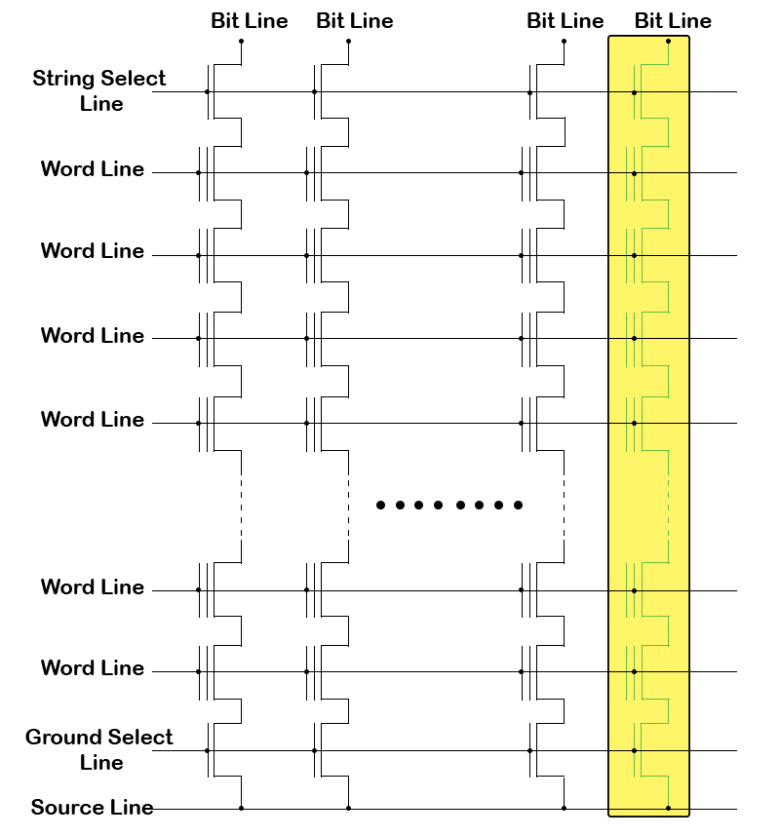 The smallest unit of reading is a page. Reading a page follows the procedure: 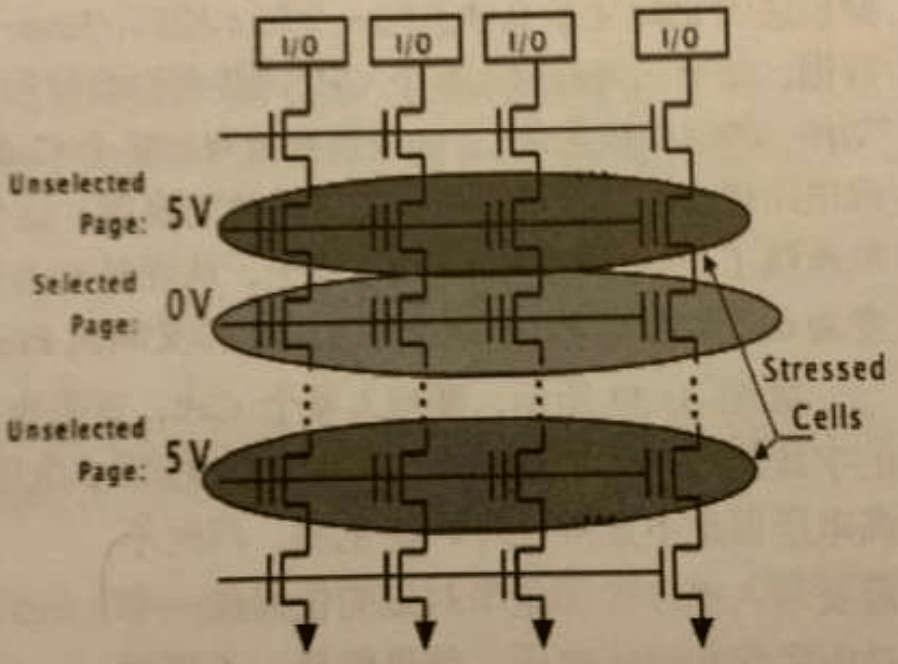 The smallest unit of writing is a block, unless writing on continuous free pages at the end of block. Writing a block follows the procedure: 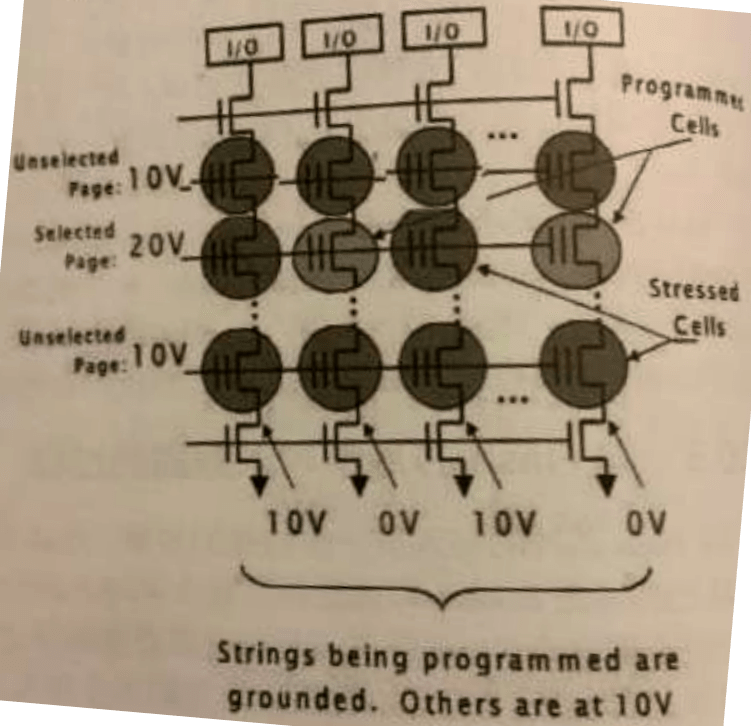 The fact that NAND SSDs must erase a whole block before updating it is a significant drawback. NAND SSD controllers must equip themselves with the following two functionalities in order to be useful and robust2:

When a write arrives at the drive, wear leveling and garbage collection cause a lot more data (than the size of the original write) to be actually moved and written. This is the notorious effect called write amplification. Typical write-amplification factor (WAF) on NAND SSDs ranges from 5x - 20x. This makes NAND SSDs perform dramatically poor at workloads involving many random writes.

Well…, is it actually? Maybe we should avoid using terms like “random writes” as they are designed for HDDs! Check out this paper. 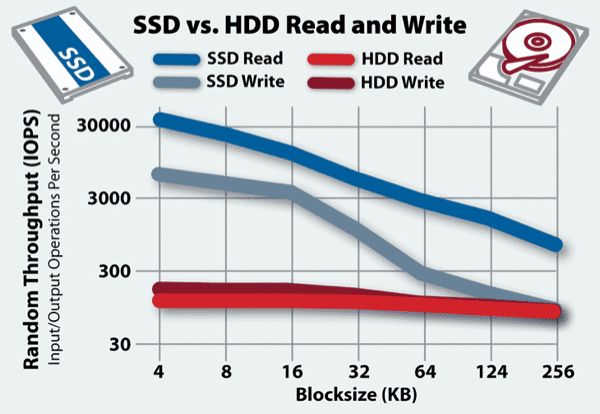 NOR flash has independent bit lines and is byte-addressable, but is much larger in size and not very practical.

As the manufacturing of 2D NAND SSDs reaches its limit, people start to jump out of pure planar design and explore a third dimension.

These 3D designs give larger capacity to each flash block. However, that also makes write-amplification worse. Manufacturing cost also becomes a lot higher. It is believed that 3D NAND SSDs will not fully replace 2D NAND SSDs3.

Intel proposes a new design of solid-state storage hardware called 3D XPoint on 2015 and release it to market under the brand name Optane on 20174. Through several years of development, this design yields the fastest SSDs available on market, and is often thought of as the next-generation state-of-the-art persistent storage hardware.

This technology is a successful example of phase-change memory (PCM) hardware - one of the most promising directions towards building non-volatile RAM. As the name 3D XPoint describes, memory cells are put at cross points of a 3D grid. It truly makes persistent storage “3-dimensional”. 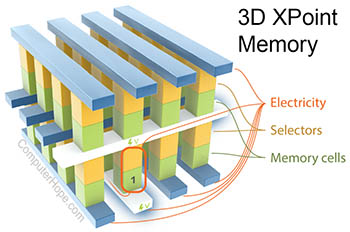 The most appealing property of 3D XPoint is that it is persistent meanwhile byte-addressable. This means that it sits in between current NAND SSDs and DRAM volatile memory on the storage hierarchy (has smaller capacity than NAND flash but comparable capacity than DRAMs; has lower speed than DRAMs but faster speed than NAND flash; and it is durable). It can be treated as either, depending on the workload.

The name sometimes refers to Optane DIMM / Optane SSDs specifically. Optane DIMMs connect to the memory bus and is directly controlled by the processor cache system. Details about its internals can be found in this recent paper 5. Optane SSD products use the same PCM media technology, but expose a traditional NVMe SSD interface.

As this paper pointed out, the current state of Optane DIMM exposes some interesting performance characteristics that lie in the middle of SSDs and DRAM:

Whenever there is caching across volatile/non-volatile media, there are consistency issues. Imagine two user requests: ① appending a new element to a data structure, followed by ② incrementing a counter in data structure header. It is possible that both requests hit in cache and, at some time later, the update ② gets evicted earlier than ①. If the system crashes at this point, the state is left inconsistent. After recovery, the user may check the header counter and may believe that the newly appended index contains valid data, while it is not - that data has not yet been persisted on storage media - so the user may read out some garbage.

For traditional disk-based FS, the volatile cache is the in-memory buffer cache, and the persistent storage is the disk drive. We do journaling with fsync()’s to maintain the ordering of requests. For NVDIMM, the volatile cache is the CPU cache, and the persistent storage is the NVDIMM chip on memory bus. NVM systems do journaling with mfence & clflush instructions to maintain such ordering. Some ad-hoc data structures (e.g., B-trees) running over NVM may directly deploy their own ordering constraints w/o the help of a system layer.